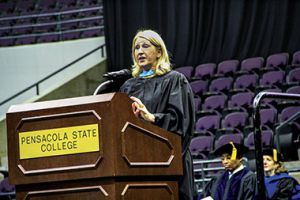 Florida Department of Education Commissioner Pam Stewart was the featured speaker at the graduation.

Pensacola State President Ed Meadows conferred bachelor’s degrees, associate degrees and certificates to 662 summer and 637 fall graduates during the ceremony. Since the College opened in 1948, more than 109,244 students have graduated from Pensacola State.

Before being appointed commissioner in 2013, Stewart served as Deputy Superintendent for Academic Services in St. Johns County, during which time the district was the highest-performing district in the state of Florida. In addition, in 2004, she was recruited to join the Florida Department of Education’s Division of Public Schools as Deputy Chancellor for Educator Quality.

Serving as Student Marshals were College Registrar Susan Desbrow, director of admissions, and Judy Floyd, director of student services on the Warrington campus.