More American women die because of domestic violence than from breast cancer.

This was only one of the facts that Marsha Travis with FavorHouse of Northwest Florida shared with the Lady Pirates basketball team on Friday,  Sept. 16.

October is Breast Cancer Awareness Month and Domestic Violence Awareness Month. Travis mentioned both to the team about both but noted breast cancer receives much more attention.

“Domestic violence does not discriminate. No one is immune to it,” said Travis, a program director at FavorHouse – a certified domestic violence shelter for Escambia and Santa Rosa counties.

The issue hits close to Pensacola State College. On May 24, Carla E. Williams, a beloved and longtime professor, mentor, coach and friend, died as a result of domestic violence.

“It’s about power and control in intimate relationships. …Black women are not immune to it. There are so many Carla Williams,” said Travis, who encouraged the student-athletes to research the backgrounds of potential intimate partners. 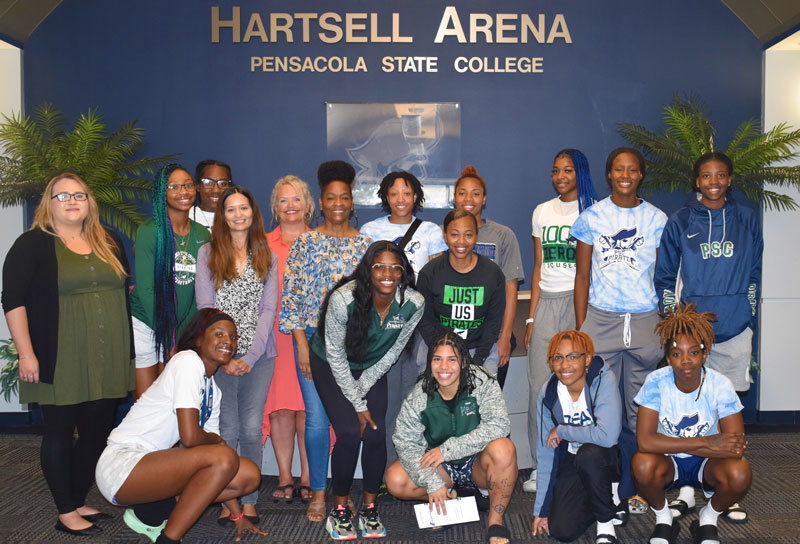 “Get some knowledge in your head about relationships! There are laws on the books in reference to abusive relationships. If you don’t get the response you want from law enforcement, call FavorHouse.”

The U.S. Department of Justice defines domestic violence as a pattern of abusive behavior in any relationship that is used by one partner to gain or maintain power and control over another intimate partner.

Domestic violence can be physical, sexual, emotional, economic, psychological, or technological actions or threats of actions or other patterns of coercive behavior that influence another person within an intimate partner relationship. This includes any behaviors that intimidate, manipulate, humiliate, isolate, frighten, terrorize, coerce, threaten, blame, hurt, injure, or wound someone.

“I knew Coach Carla (Williams.) She was my math teacher and an all-around amazing person. Her death really hit us all hard,” Redmond said.

“I’m glad we had this today. I’ve learned so much about relationships especially the signs of unhealthy ones. And I’ve learned the importance of background checks.”

In the U.S., about 1 in 4 women and 1 in 10 men have experienced sexual and physical violence and/or stalking by an intimate partner, according to a 2015 National Intimate Partner and Sexual Violence survey, conducted by the CDC.

In the U.S., about 1 in 4 women and 1 in 10 men have experienced sexual and physical violence and/or stalking by an intimate partner, according to a 2015 National Intimate Partner and Sexual Violence survey, conducted by the National Centers for Disease Control and Prevention (CDC).

Travis said domestic violence can happen to anyone regardless of race, age, sexual orientation, religion,  sex, or gender identity, socioeconomic background or and education.

“Domestic violence occurs in both opposite-sex and same-sex relationships and can happen to intimate partners who are married, living together, dating, or share a child.

“Domestic violence is very serious. Don’t take it as a joke. And don’t stay in these relationships,” Travis said, adding that danger still exists after some relationships end.

“The most dangerous time for a domestic violence victim is when you leave the relationship,” she said, explaining the loss of power and control can be a trigger.