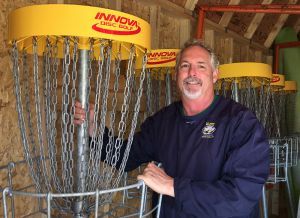 Sometime this spring, the discs will be flying across open fields on Pensacola State College’s Pensacola campus.

Intramurals coordinator Doug Rogers and staff will soon install six disc golf baskets on campus at various locations near the track, and behind the softball field. Rogers said that though there are only six baskets, there will be different tee areas set up so as to make three different six-basket courses. (Think of the basket the way you think of a “hole” or “cup” in traditional golf, or what disc golf players call “ball golf.”)

“There won’t be a lot of trees to work though,” Rogers said of the new course, which will feature tee pads as well as the Innova DISCather chain baskets. “It’s going to be all Par 3 holes. But people will have an opportunity to come out and throw, practice and maybe learn the game.”