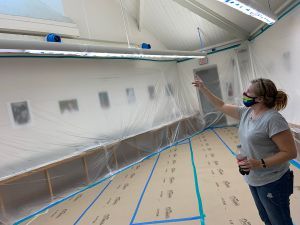 Michelle Schulte gestures toward the floor-to-ceiling sheets of plastic tarp covering the walls, art works and furniture in the Anna Lamar Switzer Center for Visual Arts as she guides a visitor through the corridors.

“It looks like a Christo installation,” she says, referring to the late artist, who was known to wrap buildings and public parks and other large things.

Schulte, the gallery director and chief curator of the Switzer Center, has been working steadily alongside her Visual Arts Department colleagues to help clean the damage inflicted on the Center by Hurricane Sally and prepare it for re-opening.

With Krist Lien, Visual Arts department head, she steps into one of the Center’s unique pentagonal “pods,” now emptied of furniture and lined top to bottom with plastic. Gesturing toward the water damage and mold along parts of the ceiling, she says, “Pretty much everything in the older parts of the complex was damaged. Fortunately, the newer construction was spared from damage,” she says, referring to the brand-new Switzer Gallery and Charles W. Lamar Studio. 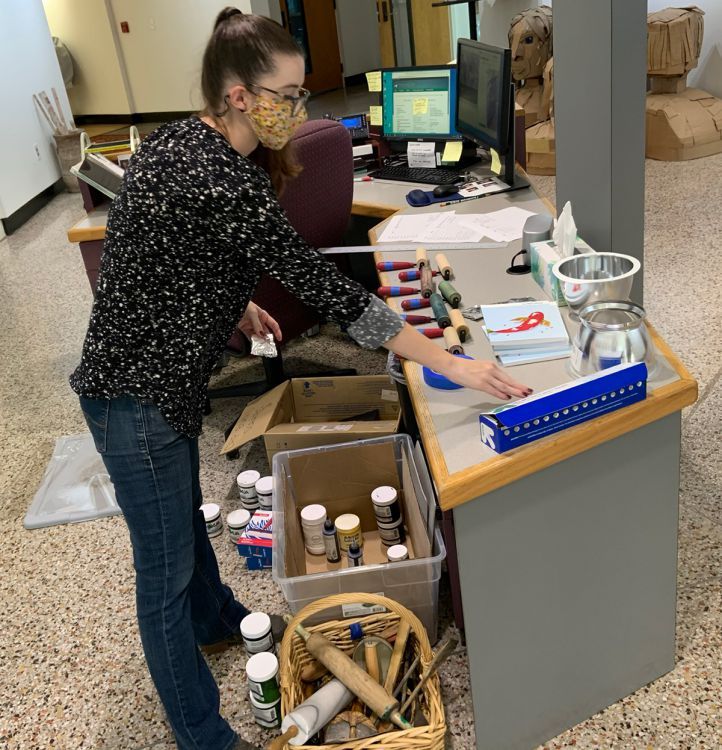 Carissa Heinrichs, professor of printmaking, arranges a lineup of rollers, ink jars and other supplies to give to students for home assignments.

Lien indicates the skylight of the peaked room, known as a “monitor.”

“The crews are working to clean and seal every one of the monitors,” he says. “And all of the ceilings will be cleaned, sanded and repainted.”

Sure enough, in several of the pods, crews on scissor lifts were scraping away at the ceiling damage and preparing the surfaces for paint.

None of the art within the gallery was damaged, she says.

While repairs are underway, classes have been shifted to makeshift areas, such as the “Big Room” of the new Switzer Gallery, which can be partitioned and restructured for a variety of uses.

Instructors, who already had been forced to adapt their hands-on classes to “virtual studio” classes in the wake of COVID-19, have been making additional adaptations thanks to Hurricane Sally.

Carissa Heinrichs, professor of printmaking, arranges a lineup of rollers, ink jars and other supplies on a handy reception desk. Soon her students will arrive and be assigned equipment for making prints at home, hand pressing their prints, rather than using one of the College’s mechanical presses.

“I’m also having to assign them water-based inks rather than oil-based, to make cleanup easier,” Heinrichs says. “It’s definitely still going to be more difficult, though.”

As soon as Hurricane Sally indicated its approach, ceramic instructor Micah Cain came to the College and rearranged and tarped equipment and items in the kiln area. Most of the interior of the department was unharmed, he says.

Cain also is having to restructure his classes to accommodate the repair efforts, relying once again on virtual classrooms.

“Shades of spring,” he says, referring to the major restructuring of classes during the spring semester because of the pandemic.

If anything, say the instructors, dealing with the COVID-19 crisis helped condition them to deal with sudden crises such as Hurricane Sally.

“Yes, it’s just another challenge,” Schulte says. “Everyone here, the students, instructors, administration, has been really supportive throughout this whole thing.

TOP PHOTO: Michelle Schulte the gallery director and chief curator of the Switzer Center, indicates mold and other water damage on the ceiling of one of the classrooms in the Visual Arts Gallery. 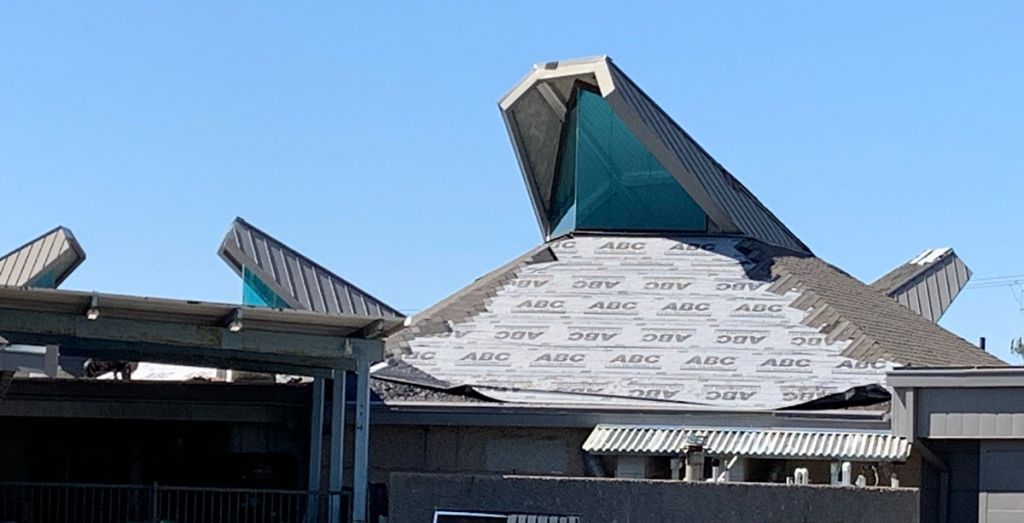 The roof of the Visual Arts Center sustained substantial damage from Hurricane Sally. 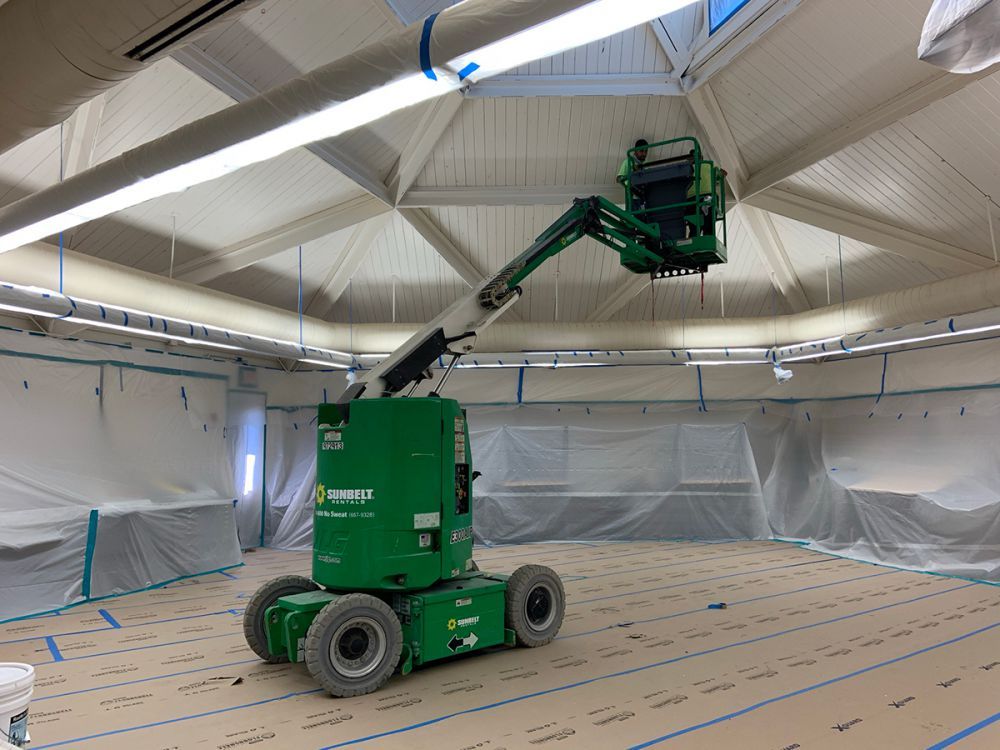 Workers use a basket crane to reach the water-damaged ceiling of one of the Visual Arts Center classrooms.