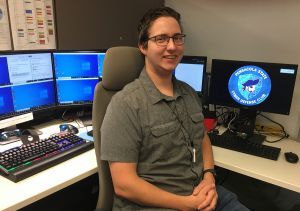 Ted Sumrall likes to help people. He’s just that kinda guy. So, he’s working in the perfect place, because Sumrall is one of the folks who answers the phone when you’re having technology problems and call the Pensacola State College Help Desk.

“I like talking to people,” said Sumrall, a recently-hired PSC Technology Support specialist. (He’s worked the position since 2020 but was officially a Kelly Services – an employment staffing agency – employee.) “One of my favorite things to do is to talk to strangers. I like socializing. It’s always rewarding to me to meet someone new and talk to them.”

Sumrall was officially hired by the College just a month ago.

“If he’s not the best technician I’ve had come through here, he’s in the top three,” said Sumrall’s supervisor, Ricky Smith, PSC Technology Support coordinator. “He’s on the short list, for sure.”

Sumrall is a friendly fella, for sure. Big smile. Nice as can be – if you’ve ever had him come work on, fix or replace any of your computers or electronic doohickeys, you know it’s the truth.

Sumrall is also a new dad. He and his wife, Danielle, welcomed their first child, Ollie, eight months ago.

“It has definitely been a rollercoaster of emotion and sleep deprivation,” he said. “The best part of my day is going home and seeing my family.”

Still, he said PSC is a special place. That’s why he wanted to work here. It’s why he chose to finish his bachelor’s degree here instead of going somewhere else.

“I love it,” he said of the College. “I wouldn’t want to go to another college or be taught any other way. The instructors all do a really good job. They inspire students to go forward and learn more for themselves.”

He’s always been interested in technology and took apart a clock and reassembled it at age 6 or 7.

But it was a stressful moment in high school that solidified his career path. Sumrall was using his father’s business laptop for an online class and the computer got a virus. Dad was expected to be home in 45 minutes and Sumrall wanted to get it off before his father returned. He worked and tinkered and removed the virus. His father never knew.

“Sorry Dad,” Sumrall said of the event that propelled him.

“It was that rush of adrenalin at a pivotal age where I was easily influenced and impressed,” he said. “I got the virus off the laptop and just became more intrigued.”