Column: We don’t always get what we want, but we still have hope 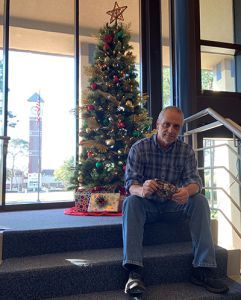 The song on the radio tells us it’s “the most wonderful time of the year,” and who are we to argue? We don’t have a holiday song of our own to counter with. Besides, it is kinda nice.

There’s a chill in the air. (OK, it’s a Florida chill. But still, chill.) We gave thanks over turkey and cranberry sauce just a few weeks ago and have a big ham feast coming up. Pensacola State’s M.J. Menge Clock Tower is chiming with Christmas music giving the Pensacola campus a cloak of melodic tinsel. But don’t you wish we could get a little snow?

Yet we don’t always get what we want, as a very famous non-Christmas song tells us. Any kid who ever wanted a minibike for Christmas and got, instead, a miniature Evel Knievel action figure with its own miniature motorcycle knows that. (Way cool, for sure. But I wanted to jump my own ramps in the front yard on my own little minibike!)

No, we don’t always get what we want. This year was proof. Because who wanted any of it? The face masks. The shutdowns. The political tension. The storms. The sickness. The deaths. And maybe ─ most dramatically ─ the social isolation so many of us felt this strange, strange and lonely year.

The first thing that came to my mind when I heard the news was how bummed I was for the mother-and-daughter nurses (Holly Bartlett and Aubrey Hedlund) that I had just written a feature on and who were going to graduate together. I mean, graduates still graduate. They just don’t get to attend a swanky ceremony where their friends and families in the audience make a spectacle of themselves. (I’m probably just thinking of my own PSC graduation in 2021 when I expect my kids will cheer Dad like I was giving them all minibikes for Christmas and they were still 10 years old.)

But then again, we don’t know what 2021 will bring us. (Probably not minibikes. Can you tell I really, really wanted a minibike? Or have I not mentioned it enough yet?)

We can hope we have a graduation ceremony in spring next year. We can hope the upcoming vaccine does its job and we can all come back to the College with less restrictions, less uncertainty, less stress and more hope.

Not that we gave up hope this year. We didn’t. We still had classes, even though so many were moved to online to keep students, faculty and all at PSC safe. I’ve grown to love PSC’s online courses myself. In this horrible year, I’ve completed four more classes on my decades-long pursuit to graduate. I test much better when I’m in pajamas.

No, there was hope. You could see it in the faces of the students who did come on campus this fall for certain classes. Actually, you couldn’t see it in their faces since they were wearing masks. But you could sense it. The very fact that these young students were willing to charge on and continue in their pursuit of an awesome education and better life, despite all the restrictions and hardships, is proof of that continued hope.

You could definitely sense the hope in PSC’s awesome faculty and administration that brainstormed and called audibles and remained flexible in the College’s effort to continue the educational mission it’s been entrusted with since just after World War II. They turned brick-and-mortar classes to online on a dime and ensured that the students still received the education, commitment and support they were entitled to and deserved.

So who knows about 2021? Maybe we’ll still wear face masks. Maybe we’ll still remain 6 feet apart. But if so, we’ll remain apart together ─ if that makes sense and isn’t too corny. Maybe we’ll have to take an online class instead of a brick-and-mortar class at some point or another. Maybe 2021 will test us like 2020 has. If so, we’ll lean on each other and make it through. Somehow. Even if we’re leaning on each other virtually. What choice do we have?

Look, fellow students. I’m the oldest person who has ever lived. I’m tired, falling apart and much less bright than I was years ago when I wasn’t that smart. But I’m not quitting. I’ve not giving up hope. I’m going to graduate I promise you that. And you will too. You’ve got too much life ahead of you and too much going for you not to.

Let’s count our blessings this holiday season and come back in January ready for a fresh start. Maybe 2021 will be much the same as 2020, but oh well. We’ll manage. We always do. But then again, we can at least hope it will be a better year. Maybe that minibike will come after all.

Have a wonderful Holiday Season!