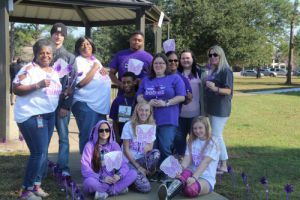 Some of Pensacola State’s Collegiate High students transformed the southwest entrance of Building 11 into a sea of purple pinwheels on Friday, Nov. 17.

The students – members of the high school’s Future Business Leaders of America chapter – planted 502 purple pinwheels in observance of the March of Dimes March for Babies Awareness Day.

“The students planted the 502 purple pinwheels to honor the 502 premature babies who were born in Escambia County in 2016,” explained FBLA adviser Evelyn Gant. “They also raised $150 for the nonprofit organization that works to improve the health of mothers and babies by preventing birth defects, premature birth and infant mortality.”

“I’m so glad that our students have taken the initiative and gotten involve with the March of Dimes, which offered services to me after Landon was born,” said Gary, who suffered from pre-eclampsia during pregnancy.

On Christmas Day 2016, Gary and her husband, Adam, took their son home.

Despite being only 10 months old, the FBLA chapter has already raised more than $500 for the March of Dimes (not including the $150 from this fundraiser). The chapter also came in third place among Escambia County high schools in fundraising for the organization. 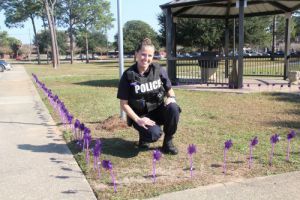 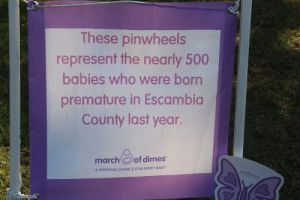