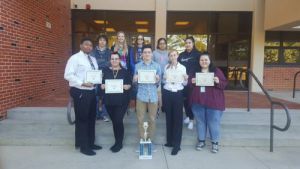 In its first year, the Collegiate High FBLA chapter beat out middle and high schools from Escambia, Santa Rosa, Okaloosa and Walton counties to capture the coveted title. The FBLA is dedicated to helping students improve their leadership skills and achieve academic goals.

Demarius Daniels and Breana Hundley won second place in Job Interview and Client Services, respectively, and will serve as voting delegates at the leadership conference.

Evelyn Gant, FBLA adviser, said she was extremely proud of Collegiate High’s showing during the competition.

“Initially we were just shocked with the award. When we heard ‘Collegiate High,’ we all looked at each other for a minute or so, and then just started celebrating,” Gant said of the Outstanding Chapter award.

“We’re not only a new chapter but one of the smallest chapters with only 12 members.”

Since being chartered in 2017, the Collegiate High chapter has held several activities ─ including fundraisers where more than $650 was collected for the March of Dimes. In November, chapter members also held a food drive for Manna Food Pantries.

In 2017, the chapter came in third place in the March of Dimes youth division fundraising. Chapter members say they plan to be No. 1 in 2018.

“We’re a small group that packs a strong punch,” said Daniels, who pulled from personal experience when he competed in the Job Interview category.

“I’m an assistant manager at Ross (Stores) and I work at Walmart so I’ve interviewed potential employees before. During the competition, I just turned that around and become the person being interviewed.”

Daniels, who will graduate in May, plans to become a nurse.

Toth echoed Daniels’s sentiments – saying he used real-life skills he learned while working with his father – in the Personal Finance competition.

“I’m familiar with creating a budget, setting long- and short-term goals, mortgages, stocks and investing,” said Toth who graduates in May and want to be a business owner.

“Since I already work at Tom Thumb, I know the importance of customer service so I was able to use a lot my job experience during the competition,” she said.

Hundley will graduate in December and plans to pursue a career in veterinary science.

The Collegiate High Future Business Leaders of America chapter was selected the District 1 Outstanding FBLA Chapter of the Year. 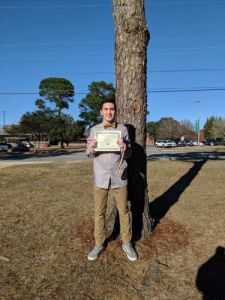 Nicholas Toth won first place in Personal Finance category at the District 1 FBLA competition. He, along with Leslie Etheridge who won first place in the Healthcare Administration category, advanced to the state FBLA Leadership Conference set for March 16 in Orlando. 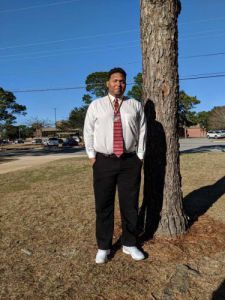 Demarius Daniels won second place in the Job Interview category. He will serve as a voting delegate at the state FBLA Leadership Conference. 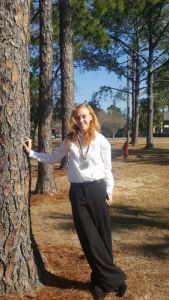