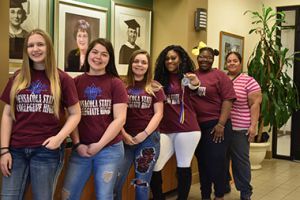 “They did an amazing job representing PSC and Collegiate High School,” she said. “These young ladies worked really hard. They are a small committed group but they are dedicated and still pulling through.”

Blount, Bounsana, Holman and Soulet will advance to the state FBLA Conference set for March 22-25 in Orlando.

The competitions boosted the confidence of the Collegiate High students who say they are ready for the state conference.

Soulet said she prepared for the FBLA conference by studying and found the competition challenging but fun.

“I tried my best and I’m glad my preparation paid off,” said the 18-year-old who plans to enroll in Pensacola State after graduation in May.

“I really practiced and rehearsed at home,” said Blount, who was battling a cold and laryngitis during the conference. “During the competition, I put my best effort forward. I was surprised I placed but very happy.”

Blount, 18, wants to attend Pensacola State after graduation and then move on to the University of South Alabama.

Bounsana said she was proud to place at the regional level.

“Being a member of FBLA has really changed me. As an FBLA member, I’ve learned I can be outspoken but now I do it in a more professional and positive manner,” she said.

The 18-year-old senior plans to attend Pensacola State after graduation and later a university.

“I want to earn my doctorate one day,” she said.

Holman, a Pensacola State freshman, didn’t expect to perform so well in the district competition.

“I wasn’t experienced at all in the competitive arena but it was a nice surprise to place. I’m really looking forward to the state conference,” she added.