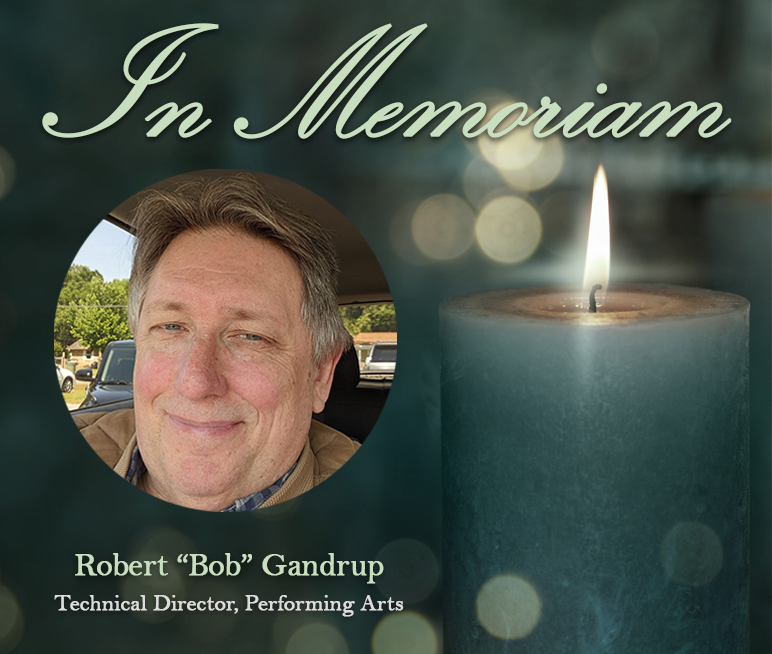 Tragedy and heartbreak have come again to Pensacola State College.

“For over 20 years, Bob designed, built, and painted sets, and designed lighting and sound, not only for the Performing Arts Department but also for special events at the College,’’ said PSC President Ed Meadows. “He was a gifted graphic artist, a valued employee and respected by the numerous students that took his classes and worked on the ‘Tech Crew.’ Bob was also a mentor to many of the area’s technical directors and stage workers. We will miss Bob’s smile, intelligence, artistry, and gifts.”

Gandrup, a married father of two daughters, began working at PSC in 2001. He handled all technical aspects of PSC Performing Arts productions, including set design and installation. He also was an adjunct instructor who taught Introduction to Technical Theatre and Technical Lab.

He earned his Bachelor of Fine Arts degree from the University of Texas at El Paso. Gandrup also earned a certification in Rigging from the United States Institute of Technical Theatre.

“He was my Imagineer,’’ said PSC Theater Director Rodney Whatley, referring to the creative engineers of Walt Disney Company. “Everything visual outside of the performers in our productions was 100 percent his. I trusted him implicitly. We were production partners.”

Gandrup is the second Pensacola State employee to pass away in recent weeks. Math professor Carla Williams, also a PSC alumna and assistant basketball coach, was killed in a domestic violence assault on May 24.

“I think we’ve always had good performers and good shows at PSC,’’ said theater student Benji Rich, who was part of Gandrup’s technical crew which helped build sets and assisted in production details. “His sets elevated the shows to a completely different level.”

Gandrup’s final project was working as technical director for the upcoming annual PSC Summer High School Onstage Workshop production of “All Shook Up,’’ with performances set for July 22-24 and July 29-31 at the Ashmore Auditorium on the Pensacola campus. The production melds characters and plots of William Shakespeare with the music of Elvis Presley.

“It’s his final design,’’ Whatley said. “The production will be a tribute to him.”

Whatley said Gandrup finished completing the design for the set of the “All Shook Down” production and said the Performing Arts Department is seeking someone in the local theater community to step in and take Gandrup’s technical vision “across the finish line.”

Whatley is survived by his wife Kim, and daughters Jessica and Emma.

Students, faculty, staff and others who want to leave a note of condolence can do so in the lobby of the Ashmore Auditorium, Building 8. Cards and pens will be provided.