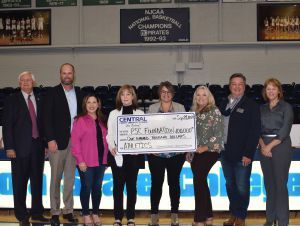 Central Credit Union of Florida has pledged $100,000 over a five-year period to the Pensacola State College Athletics Department.

Danny Gilman, chairman of the CCUFL Board of Directors and a PSC alumnus, made the gift announcement Monday, Sept. 27, at a press conference in the College’s Hartsell Arena.

“Today, we are strengthening our commitment to funding the athletics program because we believe future leaders are groomed through PSC’s team sports and your strong focus on academic excellence,’’ Gilman said. “Our commitment to provide $100,000 to support the future leaders developed through PSC’s athletics program is a signal of our believe in your work and the value that work provides to our members.”

Pensacola State President Ed Meadows called the gift-pledge “a shot in the arm for athletics.”

A portion of the donation also will go to the College’s General Athletics fund.

“Not only are we extremely excited to have the loyal support of Central Credit Union, but we are thrilled to highlight them as the outstanding community-driven organization that they are,’’ said PSC Booster Club Director Hailey Lotz, who is also the PSC Alumni Association director. “A gift this size is a wave of momentum for athletics.”

CCUFL has been a longtime supporter of PSC Athletics having donated more than $12,500 over the last five years.

“This is huge,’’ Lotz said. “It’s been a trying year for athletics (because of COVID-19) so this comes at an amazing time.”

Meadows noted that CCUFL has supported various PSC endeavors, from supporting the PSC Fund for Excellence and various College fundraising events, including Days of Clay and the Big Break Golf Tournament.

“This is a great day,’’ Meadows said. “Our coaches and athletic directors couldn’t be more happy to have this kind of gift for athletics.”

PSC Athletic Director and head baseball coach Bryan Lewallyn told the CCUFL delegation at the press conference that the College “appreciates you and what you mean to Pensacola State College. We look forward to building and cultivating this relationship.”

Pensacola State College administrators and coaches are pictured with Central Credit Union of Florida employees in front of the PSC softball field windscreen. CCUFL has pledged $100,000 to the College’s Athletics Department over a five-year period. The softball field eventually will be named in honor of the credit union.