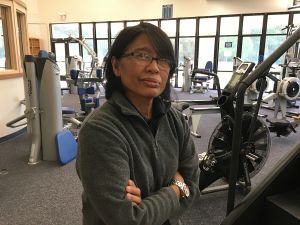 When COVID-19 hit in spring 2020 forcing a shutdown at all Pensacola State College campuses and centers, Caresse Galiza stayed busy.

“When the campus was shut down due to COVID, she came to work every day and helped paint the lines in the parking lot to make sure the campus was in top shape for reopening. She made sure every piece of equipment was thoroughly cleaned and ready to use as soon as the campus reopened.”

And the Milton L.I.F.E. Fitness Center was the first PSC Fitness Center to reopen after the shutdown, largely due to Galiza and Branch formulating and implementing a detailed reopening plan.

She has been at Pensacola State since 1999.

“The best part of the job is being with the people,’’ Galiza said. “Working hands-on with people and really getting to know them is what I like.”

Galiza is a Hawaii native and U.S. Navy veteran who was stationed for a time at Whiting Field in Milton. She was medically discharged in 1993 after suffering a brain tumor that resulted in a loss of hearing in her left ear and temporary paralysis on the left side of her face. She had surgery in the 1990s to remove the tumor and stayed in the area after leaving the military.

“It was affordable and is still affordable, compared to most places,’’ she said. “Besides, I grew up on an island with beaches. So, it’s a beach with white sand now instead of a beach with black sand. Or volcanoes.”

Galiza said she still counts on Branch’s wisdom and experience at times in her new position. But Branch, who still visits the L.I.F.E. Fitness Center twice a week to work out, said Galiza is the perfect person for the position.

“It was a seamless transition,’’ Branch said. “She was my right-hand person for all those years, so she definitely knows a lot about the system and how it works. She’s still learning her way through Workday, but so is everyone. She is just really hardworking, very dedicated and very loyal. She was definitely ready to take over the position.”

Galiza uses the equipment in the L.I.F.E. Fitness Center herself during downtime, especially the StairMaster. She’s still recovering from a torn meniscus and a torn ACL in her right knee after injuring herself during a self-defense class during “Safety Month” in 2019. She has had two surgeries to repair the damage.

“I’m better now,’’ she said. “But I still have some numbness in my knee. Exercise is good for it so I’m in the right place.”

Galiza is also in a new role as Student Activities coordinator on campus, and even runs the campus Food Pantry.

“She always has a smile on her face and is always willing to jump in and help anywhere she is needed,’’ Hill Faron said. “We are so grateful to have such a wonderful, dedicated person like Caresse working on campus here.”