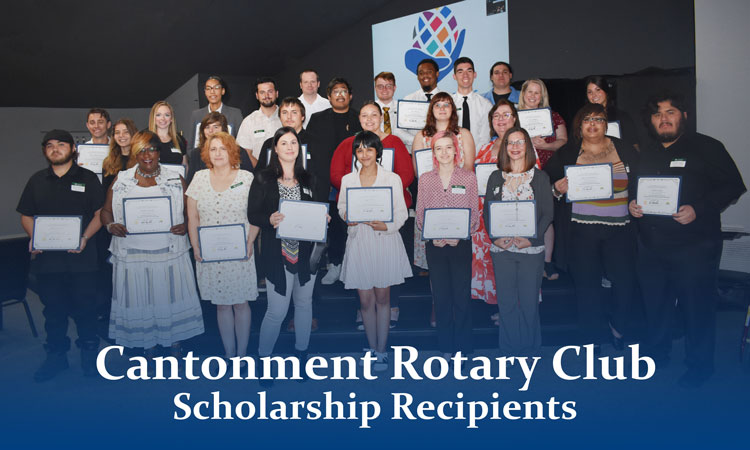 The scholarships were a godsend for the students – especially Diyawn Jackson, a mother and grandmother pursuing a cybersecurity degree.

“I am extremely thankful and honored to receive this scholarship. The funds will help me with the challenges of tuition, books and childcare,” said Jackson one of 35 scholarship recipients recognized at a luncheon held at St. Luke United Methodist Church.

A Pensacola native, Jackson returned to Pensacola from Atlanta after suffering a back injury.

“I have security and technology experience and felt cybersecurity was a good fit for my skillset,” said the 44-year-old mother and grandmother. “Attending PSC is a homecoming for me. I earned my GED at the College.”

Asherfeld praised the students for their academic achievements and noted that the scholarships are life-changing.

“We’re motivated to do this because we know that we are changing lives,” he said. “This all started with a young man (Ike Terry) who lost his life on a basketball court. He was a very giving person.”

“‘Serve To Change Lives’ is our Rotary Club’s 2022 mission statement, and we changed lives on April 27,” she said. “Every year, the Cantonment Rotary and PSC join forces to change lives and make dreams come true. In honor of my father, Ted Ciano and our family, we are honored to give $40,000 to these PSC students.”

“… These scholarships would mean everything to him. My father was self-made ─ he started out as a service manager at a dealership – and eventually owned his own dealership,” she said. “He never felt that vocational industry programs received enough recognition. And in my own opinion, there is not enough money that goes to vocational programs such as automotive mechanics as well as air conditioning, plumbing and electrical, and there is such a great need.”