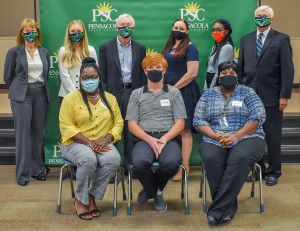 Sandy Sansing is a successful and accomplished man. The Pensacola businessman has built an automobile empire across the Gulf Coast, including seven car dealerships in Escambia and Santa Rosa counties.

But Sansing knows he couldn’t do what Regina Young hopes to do – become a social worker who assists children, the elderly and the most vulnerable.

Young is one of 33 Pensacola State College students registered for the 2020 academic year who were selected as Sansing Scholars and received a Universal Scholarship. Sansing met Young and other “Sansing Scholars” at a pizza luncheon on Monday at the Pensacola campus Student Center.

“I couldn’t be a social worker,” Sansing said, looking toward Young. “I think it would tear my heart out.”

Sansing, who attended then-Pensacola Junior College on a golf scholarship, knows that finances can be a huge obstacle for some college students. He graduated from the College in 1967.

“I went to school here,” Sansing told the scholars. “I didn’t grow up as a rich kid.”

Sansing inspired the scholars with bits of his own life story and shared anecdotes of determination that helped forge a strong work ethic.

He told stories of how he learned to identify the big 25-cent tippers when he was a bag boy at the long-gone Jitney Jungle supermarket on 12th Avenue. It was there he learned to recognize personality traits among the store’s customers, enabling him to interact with people from various backgrounds. He learned to value all people, not just the big tippers.

“I learned that everyone is important,” Sansing said. “We’re all gifted differently.”

The scholarships cover tuition, fees and books up to $2,000. Among other requirements, recipients must demonstrate financial need and have at least a 2.0 grade point average.

Andrea Krieger, Executive Director of Institutional Development, acknowledged the value and reach of the Sansing family’s generosity to PSC.

“It makes a huge difference,” she said. “A good thing about Pensacola State College is that a dollar goes a long way.” PSC is consistently recognized as one of the most affordable colleges in the nation.

PSC President Ed Meadows acknowledged the Sansing family’s generosity to not only the College, but the community, and told the students that they should strive to take Sansing’s story to heart.

“You heard him talk about hard work and being an honest person,” Meadows said, adding those traits will help produce success and fulfilment, even if students don’t yet “know anything about what they want to do.”

Some of the scholars aren’t sure exactly where they will go after graduating from PSC, but they do know what they would like to accomplish. And they thanked Sansing for helping to make their dreams reachable.

“I really appreciate it,” Young said. “If not for him, I don’t know what I would have done. This helps with school and books and it’s just a blessing.”

Young said she hopes to “help the young and elderly and help the single mothers and fathers better themselves” when she graduates in 2021.

“I want to give back to the community like Mr. Sansing has,” she said. “He’s a real inspiration.”