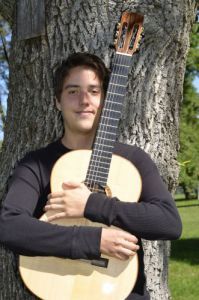 A native of Minnesota, Jara was a student of Alan Johnston at the MacPhail Center for Music in Minneapolis until 2011 when he moved to Paris to study with Judicael Perroy.

He studied with Perroy for six years and during that time completed his bachelor’s degree at the Conservatoire National Supérieur de Musique de Paris where he also studied with French guitarist, Olivier Chassain, and lute master, Eric Bellocq.

In 2016, Jara won the Tokyo International Competition, and returned to the U.S. to win the prestigious GFA’s Rose Augustine Grand Prize.

Jara’s 2017-18 concert tour began in September where he was slated to perform more than 50 concerts in the U.S., Canada, Mexico, Guatemala and Panama, including an April 5 concert at Carnegie Hall.

Tickets for the Pensacola State concert can be purchased online at www.pensacolastate.edu/lyceum or at the Lyceum Box Office, Building 8, Room 861, from 8:30 a.m.-4 p.m. Monday through Friday. Tickets also are available at the door, one hour before a performance.