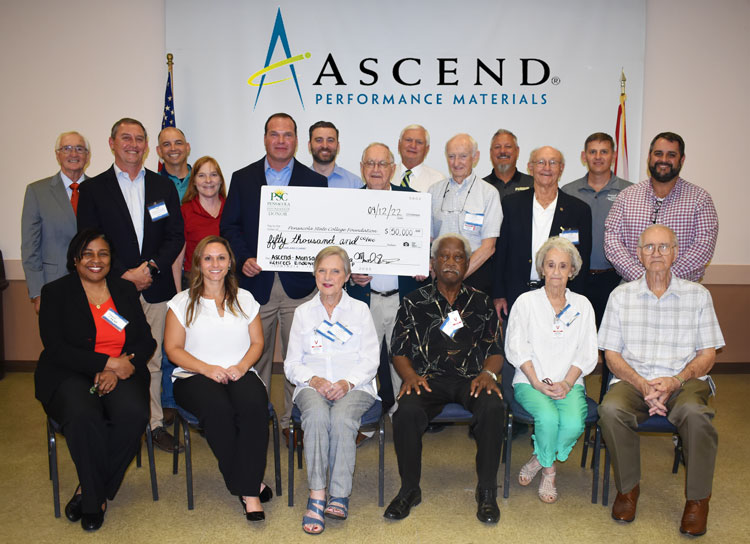 The donation matches the $50,000 given by retired employees of Monsanto and Solutia in 2019 to establish an endowed scholarship. It also brings the endowment principal to $100,000.

Now, the Ascend-Monsanto-Solutia Endowed Scholarship will help even more students attend PSC. The Monsanto and Solutia companies operated the Cantonment plant site from 1953 and 2009.

“Currently at our site we have 100-plus employees who have gone to or who have had some affiliation with PSC,’’ said Matthew Stewart, Ascend Performance Materials Senior Site Director. “I’m willing to bet that over the course of history, we’re looking at tens of thousands.”

Indeed, many of the current and former plant employees who attended the check presentation ceremony are PSC alumnus, including Gerald McArthur, president of the Association of Monsanto-Solutia Retirees.

“The companies grew here and have greatly contributed to our community,’’ McArthur said. “That growth was done hand-in-hand with Pensacola Junior College and Pensacola State College. Our organization wants to leave a legacy of support to the students at PSC in recognition of our long relationship with the College.”

Scholarships will be awarded to students who have demonstrated an interest in the fields of chemical engineering or health care and who have a financial need. Preference will be given to students who have an association with Monsanto, Solutia or Ascend including current employees wishing to enhance their job skills.

PSC President Ed Meadows said the scholarship endowment will bring about positive change and momentum both for the students and the region.

“Their contribution to an endowed scholarship will be available in perpetuity for students navigating the ever-changing world of engineering technology and the increasingly demanding field of nursing,’’ Meadows said. “We at PSC are so very grateful for the long-standing support of Ascend that has evolved through the efforts of Solutia, Monsanto and Ascend employees.”