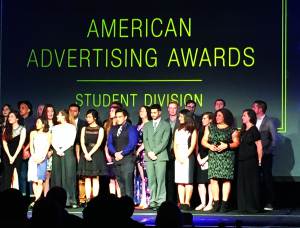 Current Pensacola State student Zack Blessing and Amber Sidner, who graduated in December 2016, were among the winners in the AAF Student American Advertising Awards competition.

The American Advertising Awards, formerly the ADDYs, is the advertising industry’s largest and most representative competition. 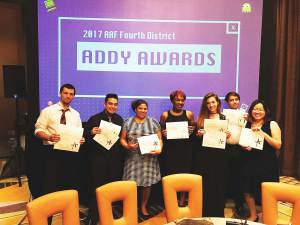 Blessing won in the Cover/Editorial Spread or Feature series category for his cover of the Arkady Renko Spy Novel Series.

“It was kind of a shocker to do so well at state and advance to the national competition,” said Blessing who will graduate in December.

Sidner, who works at Lamar Advertising Co. in Pensacola, placed in the Book Design category for her work, Bike: A History.

The two graphic design majors were among seven Pensacola State students who placed at the 2017 AAF Fourth District ADDY Awards held in Miami in May.

Overall, the Pensacola State student-delegation won a Best of Show, eight gold medals and two silver medals, with Blessing and Sidner advancing to the national competition.

At district level, Blessing earned a gold in the Collateral Campaign Material category, and a silver in the Book Cover Design category for the Arkady Renko Spy Novel Series.

Sidner won Best of Show and a gold medal in the Collateral Publication Work category for Bike History.

Kelly Bestgen won gold for her Book Cover Design and a silver for Conference Material entry.

Other Pensacola State students to place include:

Katherine Chen won a gold in the Identity System category.

Linh O’Briant, graphic design instructor and co-program coordinator for the graphic arts department, said she was extremely proud of the students.

“We had seven students going to the award ceremony and they walked away with 10 medals and a Best of Show,” O’Briant said. “I thought the students did amazing. Our school won more medals than the bigger schools in the competition.”

“The college’s graphic design program is phenomenal. The opportunities are endless as long as you are willing to put in the work and the instructors and professors are so willing to help you along the way,” he said.