A.J. says ‘Go Here, Get There.’ Listen to him, because he’s a nurse 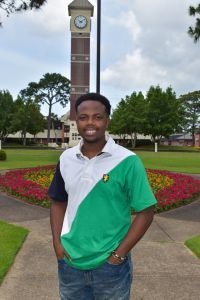 After graduating from Tate High School in 2016, Alvin “A.J.” Gordon Jr., came to Pensacola State College on a two-year baseball scholarship, and a dream of something beyond the baseball diamond.

“I really wanted to be a nurse,’’ said Gordon, who recently earned his RN Nursing Associate in Science degree at PSC. “There was a lot of influence in my family of doctors and nurses. And I truly care for people.”

Now, Gordon is still at PSC pursing his Bachelor of Science in Nursing degree.

His collegiate baseball career is over, but even while playing he was both a scholar and an athlete.

Gordon, who played middle infield for the Pirates, was named to the 2016-2017 Panhandle Conference All-Academic Team. Earlier this year, he was named a recipient of the African American Memorial Endowment Scholarship at the Dr. Garrett T. Wiggins’ “Live Your Dream” Scholarship Banquet.

After earning his BSN at PSC, Gordon hopes to attend a university and earn a master and doctorate degree in nursing.

But he credits PSC for helping him find his path.

“My senior year in high school I picked nursing,’’ Gordon said. “I was interested in science and I wasn’t bad in math. Nursing tied them all together.”

He knows he’s going into one of the best online programs around – and around includes all of the United States.

Earlier this year, U.S. News & World Report named PSC’s BSN Program as one of the nation’s best online programs for 2020.

“If you put your mind to it, you really can succeed at Pensacola State College,’’ Gordon said. “All the professors really care about you, and you get a lot of one-on-one instruction that you don’t get at other colleges. They want you to engage them, pick their brains, ask them questions. They’re doing everything they can to help you succeed.”