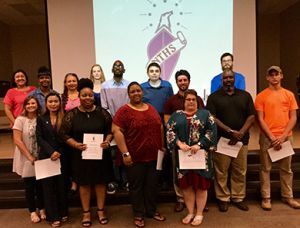 Fifteen of the 74 inductees were able to attend the ceremony.

Established in 1984, the NTHS honors the achievements of top Career Technical Education students and provides scholarships to encourage the pursuit of higher education.

Administrators, family and friends turned out for the induction ceremony. Pensacola State President Ed Meadows congratulated the inductees and encouraged them to get involved with SkillsUSA and HOSA organizations.

“Success Favors the Prepared Mind” is the motto of the society which has approximately 100,000 active members, and nearly a million members since its inception. Today NTHS serves more than 3,800 member-schools(secondary and post-secondary) and has a footprint in all 50 states. Chapters also are expanding into the Bahamas, American Samoa, Puerto Rico and Guam.