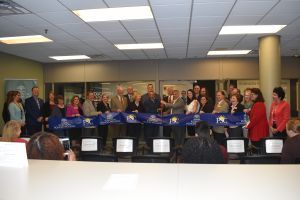 These Robinson Scholars were recognized during a Feb. 19 ceremony in Chadbourne Library following a ribbon cutting for the Robinson Honors Program Learning Center – a state-of-the-art room equipped with an 86-inch interactive television with a built-in computer and an area for lounging and studying.

“It is a space designed to allow Robinson Scholars to mingle, collaborate, study and create as they work to make a difference on campus and in our community,” said Amber Carey, Robinson Honors Program coordinator. “These students work very hard, and we wanted them to have a place they could call their own.”

The Learning Center also has a work station with charging ports for laptops and phones, and even an office where students can retreat to have quiet study time. 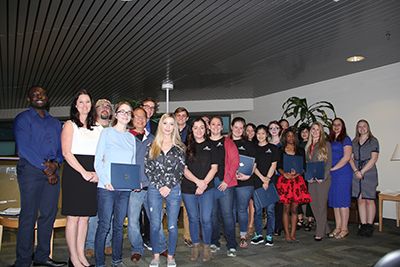 The Robinson Honors Program was named to honor the late Grover and Sandra Robinson III who dedicated many years of service to Pensacola State. The Robinsons’ son, Grover Robinson IV, and his wife, Jill, established an endowment with the Pensacola State College Foundation in his parents’ memory. The endowment assists in offsetting the cost of small class sizes, seminars, travel scholarships and other unique opportunities associated with the Robinson Honors Program.

At the recognition program, Pensacola City Councilman Jared Moore spoke to the students and their families about the concept of honor and described how service is an integral part of being a leader.