“This is a great work environment, there is nothing I don’t like about Pensacola State,” said Brannock, who has more than 15 years of law enforcement experience.

Brannock and his wife, Tammy, have four sons – including Kameran, a Pensacola State student enrolled in the Physical Therapy Program.

Two other officers ─ Rick Steele and Rodney Rani – have been promoted to sergeants.

Steele and his wife, Nancy, have a son, Stephen, who is a Milton firefighter, and two grandchildren. His father, the late H.O. Steele, was a longtime City of Pensacola police officer.

Rani’s career with Pensacola State began in 1994 when he was hired as a public safety department student assistant for the college’s Downtown Center ─ when it was located at Garden and Palafox streets.

The law enforcement bug bit Rani in the mid1990s while he worked as a security guard at Seville Quarter.

“I worked a construction job during the day and at Seville Quarter at night. One of my friends, Mike Ward, who worked for the Gulf Breeze Police Department, invited me on a ride along,” Rani remembered. “After that, I was hooked.”

In 1997, he went through the Florida Law Enforcement Academy and was hired as a full-time officer with the college in January 1998. 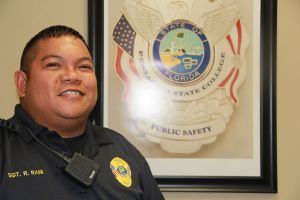 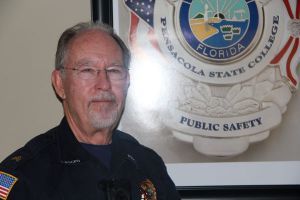 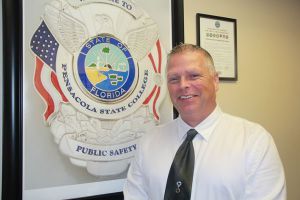