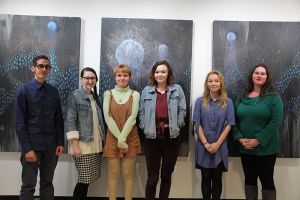 The writers were recognized at an awards reception held in the Anna Lamar Switzer Center.

In the essay category, “A Memoir of Mother Goose” by Richards won first place. In the essay, Richards shares how Mother Goose nursery rhymes played a pivotal role in her life from childhood to adulthood and motherhood.