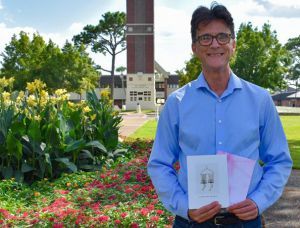 (But new books by Jones are on the way)

But who knows? Maybe a future poet laureate is being taught by Jones right now. (The Poet Laureate of Northwest Florida is chosen by the West Florida Literary Federation.)

Jones, who teaches poetry, English composition and American and contemporary literature, has the teaching pedigree for sure. In 2019 Jones, who joined the College’s faculty in 2013, was inducted into the PSC Academy of Teaching Excellence.

But even though he “teaches” poetry, Jones admitted that art can be nurtured, but rarely properly “taught.”

“My bosses might not like that, but they have heard me say it before,” Jones said. “I don’t think poetry or art can truly be taught. What I will attempt to do is nurture a student’s ability and spot what they are doing well and push them in that direction. I can help get students out of certain habits and encourage them to go beyond themselves and what is comfortable. But that spirit can’t be taught. It’s ambiguous.”

As poet laureate, Jones has looked as his role as being an ambassador for poetry in the region.

“The first year, I was embarrassed by all the attention,” he said. “But I’ve grown into it and become more comfortable in the role as the face of poetry in the community.”

Jones’ poetry is spotlighted in the most recent edition of the legendary New Orleans poetry journal “Fellswoop: The All Bohemian Review.” In fact, the whole issue is focused on Jones and his poetry. Jones has been asked to edit the next edition of “Fellswoop.”

Also, the West Florida Literary Federation will release two collections of Jones’ poems later this year. One book will feature older works that have been published in limited edition poetry chapbooks and in small poetry magazines. Another book will feature more recent material. His previous poetry book, “Blue Rain Morning,” was published in 2011.

Jones has been a leading advocate for arts and poetry since his first year as a Pensacola Junior College student in the early 1980s shortly after reading Jack Kerouac’s legendary Beat classic “The Dharma Bums.” Along with his older sister, Llisa Jones, and legendary former Pensacola raconteur Ian Fuller, Jones was a founder of Pensacola’s BackDoor Poets, which brought regular and informal poetry readings to the city for decades. (Jones credits Llisa with being a “major inspiration” on his decision to pursue poetry more intensively.)

And no, Jones didn’t read “The Dharma Bums” in class.

“I would skip English and sit in my VW and read,” he said. “I just read so much. It just spoke to me and something about it encouraged me to trust myself and to work hard and be honest in my writing. And I still think that’s a good standard.”