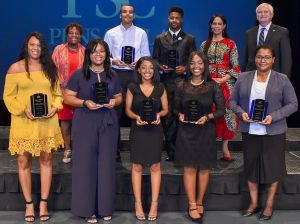 Once Lakisha Jones earns her Associate in Science degree in Pharmacy Management in December, she plans to retire. Kind of.

Because when she graduates from Pensacola State College, Jones will finally begin her true career in the pharmacy field.

“I plan on retiring from my job at NAS and starting my pharmacy career at the Navy Hospital or the V.A.,” Jones explained. “I’ve worked at the Naval Exchange for 20 years, but I finally feel like I’m going to be doing what I was always meant to do.”

Jones ─ a mother of two children, ages 16 and 9 ─ was one of 11 PSC students awarded an African-American Memorial Endowment Scholarship or Dr. Garrett T. Wiggins “Live Your Dream” Scholarship. The scholarship trophies were presented on Feb. 26 at WSRE-TV aboard the Pensacola campus. 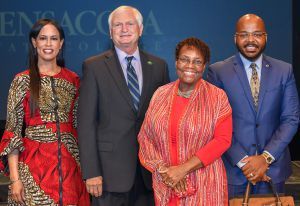 Dr. Rameca Vincent Leary; PSC President Ed Meadows; Dr. Tonie Anderson-Steele; and Aaron Watson. Photo by Zack Blessing. This is a composite photo, created from individual photos of the participants without masks. All participants wore masks and were socially distanced during the event.

The scholarships are usually awarded at an annual banquet, but this year’s event was canceled because of the COVID-19 pandemic. The scaled-back ceremony was presented by the PSC Black History/Multicultural Committee, with Rameca Leary, the College’s Coordinator of Diversity Initiatives, organizing the event. Money raised from the scholarship banquets normally help fund the scholarships, but in lieu of this year’s banquet cancellation, Leary spearheaded a “100 for 100” campaign to raise funds for scholarships. Leary and 10 volunteers set a goal of 100 people donating $100 – a $10,000 goal. 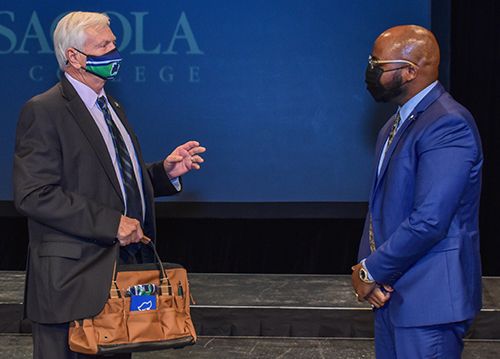 “I assembled a group of 10 volunteers to collect funds,” Leary said of the effort. “I am happy to report that through the volunteers’ efforts alone, we have met and surpassed that $10,000 goal.”

The campaign brought in roughly $13,770 for scholarships.

Pensacola attorney Aaron Watson of the Watson Firm was the award sponsor and said PSC provides a valuable role in the community. PSC President Ed Meadows presented Watson with a swanky PSC work bag filled with plenty of College swag.

“I am a product of Pensacola and I know what Pensacola State College means to this community,” Watson said. “It’s provided education for so many people through generations. So I’m grateful to help out any endeavor that involves education and helping young people.”

“These people who donate don’t know us and don’t need to do what they do,’’ said Sapp, who is studying to become a counselor. “Their hearts are very big, and it shows what kind of people they are.”

The 2021 scholarship recipients are: 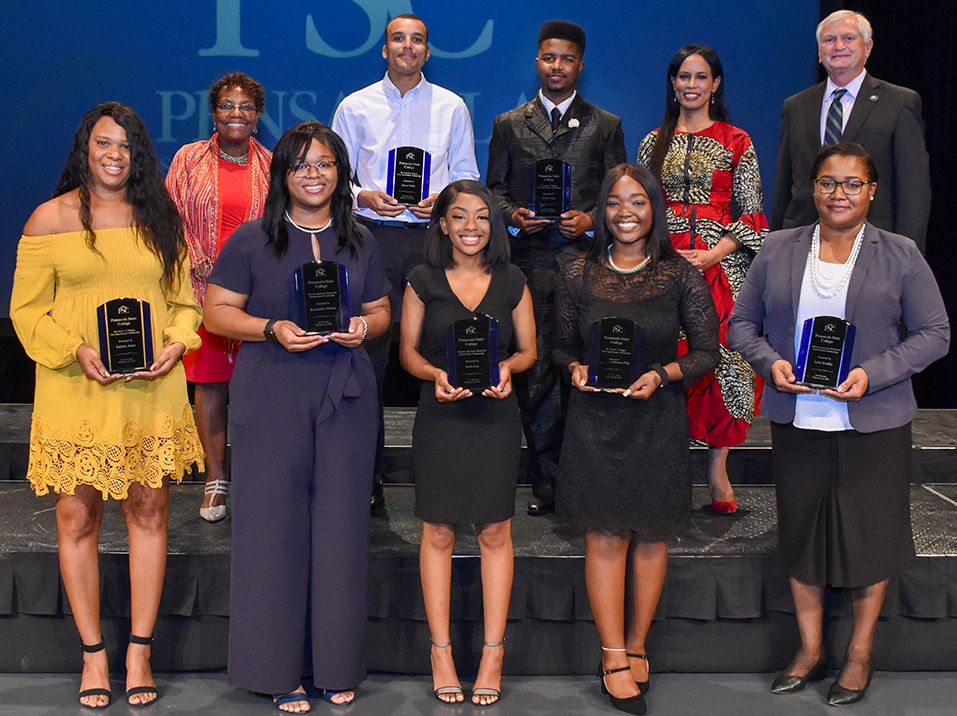