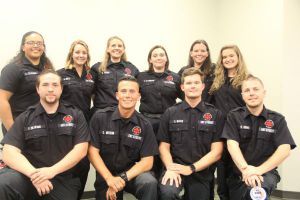 Ten Pensacola State students received their Emergency Medical Technician patches during a ceremony held Wednesday, May 10, in McMillan Auditorium on the Warrington campus.

Rebecca Brownfield, program director for the Nursing and Emergency Medical Services, served as the master of ceremonies.