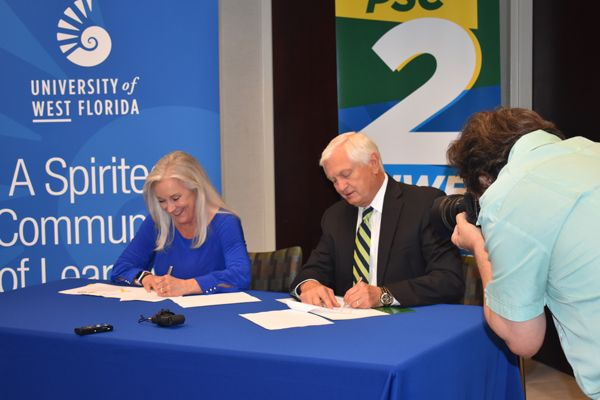 It’s an easy trip from Pensacola State College to the University of West Florida – a few miles, a few minutes.  Now, the journey from PSC to UWF is even easier.

PSC President Ed Meadows and UWF President Martha Saunders signed an articulation agreement on Thursday that allows even easier and seamless student transitions from PSC to UWF. The agreement features 61 program fields and details PSC courses and the equivalent courses at UWF which will allow PSC students who earn an Associate of Arts degree to transfer to UWF in order to earn a Bachelor of Arts or Bachelor of Science degree.

The agreement also states that UWF will “expedite admissions” of these graduates. It also allows reverse transfer of credits from UWF to PSC so former PSC students now studying at UWF can complete their Associate degree if the student had not previously done so.

The articulation agreement was signed during a press conference in the Dona and Milton Usry Board Room on the PSC Pensacola campus.

“Pensacola State and the University of West Florida have had, for many years, cooperative agreements that help students complete programs of study in our local community,’’ said Meadows said. “This articulation agreement further strengthens our efforts to ensure not only transfer but also degree attainment at both PSC and UWF. PSC is committed to student success through our efforts to collaborate with UWF on advisement, transfer and completion of students attending both institutions.” 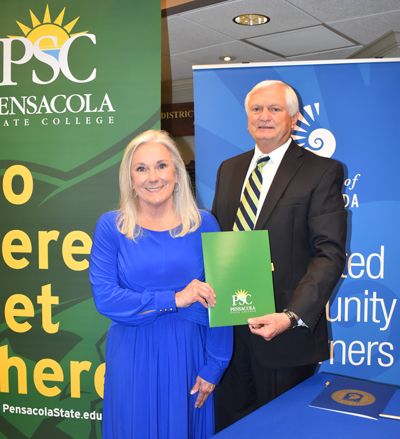 Saunders called the articulation agreement “trend-setting” and a model for other colleges and universities.

“It’s more important than ever that students have a plan when they start their academic programs,’’ Saunders said. “It’s easy to get sidetracked and it can be costly if you do.”

With the agreement, Saunders said, PSC students will “know precisely what courses they need to take to have a smooth transition and successful completion at UWF.”

Both Meadows and Saunders said that there are other articulation agreements being discussed that could include PSC Associate of Science students and more.

“This is just the beginning,’’ Meadows said.