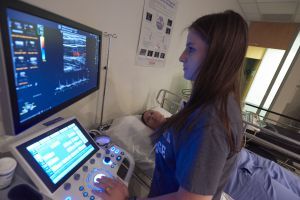 The College’s Associate of Science Degree in Sonography has been ranked No. 2 in the United States by Best Value Schools.

Pensacola State was among the colleges included in the Best 15 Associates in Sonography Programs in the Best Value Schools’ 2021 listing. Each college was ranked based on its acceptance rate and estimated tuition and fees (published on each institution’s website). The tuition data also was calculated by the in-state tuition rate and academic semester year for all schools.

“Our health care programs go up against similar programs from across the country and we tend to rank highly. This speaks well of the top-notch programs that Pensacola State offers its students,” Pensacola State President Ed Meadows said of the ranking.

“We have outstanding faculty and staff members as well as state-of-the-art facilities that are conducive to an excellent learning environment.”

Since the College’s Diagnostic Medical Sonography program began in 2000, more than 180 students have earned degrees.

PSC Program Director Lauren Sherrill said despite low tuition and fees along with small classes, the College has high standards and is committed to educating and preparing students for the health care workforce.

“With over a 90 percent first attempt pass rate on their national certification exams, our graduates are ready to step into the workforce confident and prepared,” she added.

Sonographers, also known as ultrasound technologists, use non-ionizing equipment to transmit high-frequency sound waves into a patient’s body, then collect the reflected echoes to form an image. This image, which results from the reflection of sound from the body is viewed on a screen and may be recorded on film for permanent record and used in interpretation and diagnosis by physicians.

“Pensacola State College offers a detailed and thoughtful AS degree for Florida students who are serious about pursuing a career in sonography.

“The school has an open admission policy but does require students to have an American Heart Association CPR card and pass a federal background check prior to beginning the clinical lab courses, which ensures peace of mind and strong ethical standards in the educational experience,” Best Value Schools shared on its website.

The accolade is the most recent ranking for the College’s health care programs.

In the “Best Online Bachelor’s Programs 2021 Edition,” Pensacola State’s RN-to-BSN Program was ranked second among Florida College System institutions. The College tied for 8th among all Florida colleges and universities and was ranked 53rd in the U.S. by the publication.

Pensacola State’s Medical Assistant Program also was named one of the best in Florida by medicalassistantadvice.com and findmedicalassistantprograms.org.

Pensacola State was ranked No. 2 by both websites in November 2020 and January 2021, respectively. The rankings are based on graduation rates, tuitions, admission rates, retention rates, number of enrolled students and the college’s reputation.