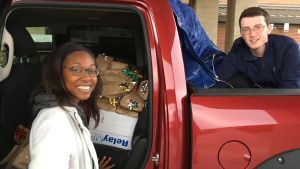 That wasn’t Santa’s sleigh stuffed with cold-weather gifts for needy veterans parked outside the Veterans Affairs Clinic in Warrington.

No, it was Ben Freeman’s Dodge Ram pickup truck – borrowed from his dad. But it was packed so tightly with decorated boxes filled with gifts that hospital officials had to fetch a dolly and some veteran volunteers to wheel it all inside.

On Wednesday, Bates and Freeman, both 17 years old, brought in the haul:


Bates and Freeman also delivered 480 Christmas cards that the group had created for veterans.

“It was a good year,” said Carol Hulse, advisor for the Milton campus PTK Beta Beta Gamma chapter. “We do this every year where they make these gift bags for homeless and needy veterans.”

Bates said she comes from a military family and “wanted to do something to honor veterans and help those in need.”

Freeman said he wanted to be part of the delivery because of “the huge respect” he has for “everyone who has served.”

Veterans Affairs officials were impressed. Not just because of the deed. But because of the massive haul. Large decorated boxes in the Ram’s truck bed were stuffed with clothing for veterans.

Michael Grey, volunteer services coordinator for the Veterans Affairs Clinic, called for more veterans to help bring in the load.

And when the truck’s bed was unpacked, Freeman told him there were plenty more packages inside the truck.

Grey said the items would be distributed to needy and/or homeless veterans that the Veterans Affairs cares for.

“There’s always a need,” Grey said. “And it’s awesome that these young people commit to doing this. That’s one of the things we like most – when schools get together and so all these creative things to help veterans.”