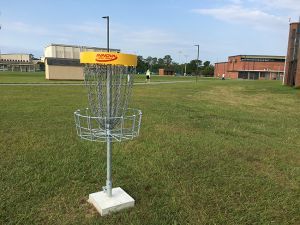 All six baskets are near the track and softball/baseball fields, and each has three different tee areas – red, white and blue – which gives players a chance to play each hole from various distances.

PSC Intramurals Coordinator Doug Rogers said scorecards and maps will be available later this week. A hole-by-hole map also will be posted on the outdoor bulletin board near the track.

While most players use their own discs, the Intramurals office will have discs that can checked out to use on the course. There is no charge to play the course.

Each hole plays as a par 3, with the longest hole stretching 320 feet.

The College also has two disc golf courses, mostly wooded, on the Milton campus that are maintained by the Emerald Coast Disc Golf Club.

Unlike those courses, the Pensacola campus course is wide open with few obstacles such as trees to contend with.

“We hope people come out and play,’’ Rogers said. “We think it’s a great addition to the campus.”