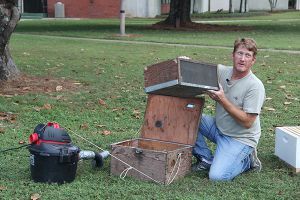 A family of “bee-nevolent” residents were relocated from Pensacola State College to sweeter climes – well actually Pace – on Friday afternoon.

Beth and Chad Cooper of Cooper Taxidermy removed a 100,000-plus honey bee colony that had built a multi-layered hive in one of the Magnolia trees near Ashmore Auditorium.

“We’re going to see if they (the honey bees) will take root – so to speak – in a new place. Sometimes they do, sometimes they don’t, but we’re hoping this hive will,” she said. “When you do a cutout like we’re doing today, there is a 50-50 chance of the hive staying at its new home.”

Using protective gear, Chad Cooper used smoke to force the honey bees to fly away from the hive. When they returned, he vacuumed most of them into a holding box for transportation. He then removed the multi-layered honey comb by breaking it into several pieces.

Beth Cooper placed the layers – that looked like a stack of pancakes – into several wooden frames that will hopefully become the honey bees’ new homes.

Diane Bracken, Pensacola State’s director of the college’s Facilities, Planning and Construction Department, said the Coopers were called in after grounds crews spotted the hive.

“They were working near Ashmore and saw the hive. We decided the environmentally-responsible thing to do would be to have it relocated rather than destroying it,” Bracken said.

According to the American Beekeeping Federation, some crops, including blueberries and cherries, are 90-percent dependent on honey bee pollination.  And almonds depend entirely on honey bees for pollination at bloom time.

The honey bees’ removal attracted quite an audience – including a WEAR-TV cameraman, a “Corsair” reporter-photographer team and Pensacola State faculty and staff members.

“I had no idea that bee hive was there,” said Mike Johnston, the college’s director of Institutional Research. “Wonders never cease to amaze me; I was stupefied when I looked in our tree and saw this harmonious, socially perfect, superorganism functioning in front of my eyes. From now on, I’ve going to look up more often and see what gifts nature bestows upon our beautiful campus.”

Rhonda Basler, administrative assistant in the college’s marketing department, also was “bee-witched” by the honey bees.

“Honey bees are such sweet creatures and they give us honey,” she said as she tasted a little bit of the honey and comb. “I had never even noticed the hive. Watching the Coopers remove it was quite fascinating. What a way to end the work week!”

The Coopers who started the family “beekeeping” business this year – Chad’s father and Beth’s mother also help the couple – said it’s important for property owners to call in professionals when they find a honey bee hive.

“Honey bees help everything, but most importantly, they pollinate flowers and crops. We definitely don’t want to lose honey bees,” said Beth Cooper, who has a bachelor’s degree in natural resource conservation and forestry. 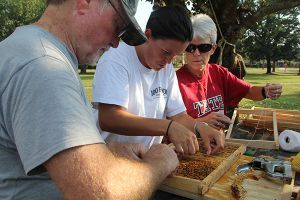 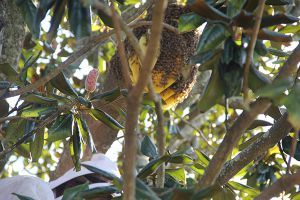 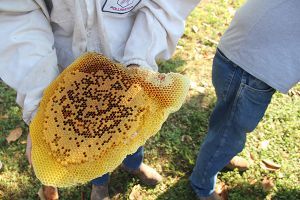